The real estate market in Madison typically starts to heat up late March as buyers and sellers work toward a summer move.  In recent years, however that trend has been blown out of the water.

In the past two years, the Madison housing market has picked up right after the Super Bowl and continued to be strong right through Mid-October.  This year is no exception!

For example, as of a few days ago there were 61 houses for sale on the near west side of Madison.  Twenty-four of those had accepted offers.  That's more than one-third of the listings, essentially off the market!  Despite the frigid temps, the real estate market is HOT, HOT, HOT!

Here's what that means for buyers and sellers.

If there is anything I can do for you, let me know.  I'm here to help!
Posted by Kathy Smith Epping at 8:00 AM No comments: 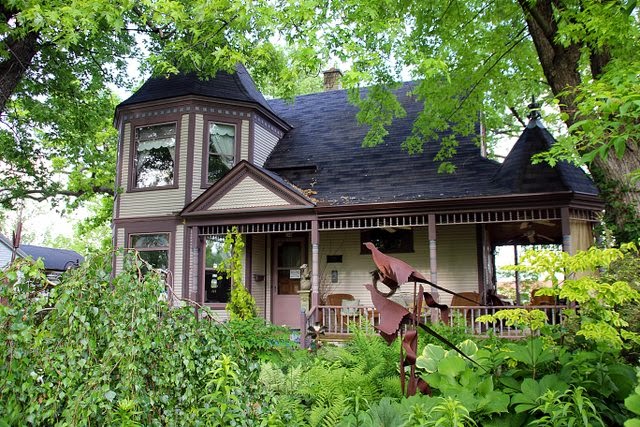 If you've been reading this BLOG for any length of time, you know that most of the posts are about the near West Side of Madison.  That's because I grew up on the near west side, I live here now, I work here, I play here.  It's where I spend a lot of my time.  I like it!

But I also get out into other parts of the city and suburbs, too.  In fact, there is a great little gem of a house in Oregon that is wonderful!  It's a Victorian nestled in the heart of the Village of Oregon.  It blends modern updates with old world charm that includes stained glass windows, original woodwork, hardwood floors and a clawfoot tub!  A wraparound porch that's perfect for relaxing and watching the world go by completes the picture.  The Village Historical Society labels the house "Oregon's finest example of Queen Anne architecture"

The gardens are spectacularly landscaped by a professional who knows his plants and has created a private paradise.  All of this with a 3-car garage...wow!  It's a classic beauty,  If you know anyone looking for such a property, get in touch.  I know just the place!
Posted by Kathy Smith Epping at 1:53 PM No comments:

It appears that winter has finally decided to arrive!  While we may have thought we could escape with our backs intact and shovels barely put to use this winter season, Mother Nature has other ideas.

Not to fear, spring really is just a few weeks away.  And if you need a little spring "pick-me-up", the WPT Garden Expo is a great place to get your fix.  The 22nd annual event is slated for February 13-15 at the Alliant Energy Center.

The Expo offers more than 150 demonstrations and seminars, local and regional businesses that offer advise and tricks and tools of the trade and the opportunity to mingle with more than 20,000 other garden enthusiasts.

It's a great escape during these cold and snowy days of winter to remind us that yes, spring will arrive.  Time to get ready for it!

Posted by Kathy Smith Epping at 8:39 AM No comments:

With the Super Bowl now concluded and New England crowned NFL world champs, concern over low air pressure in footballs will rapidly retreat from our consciousness. Concern over whether and when low mortgage rates will rise however, should never retreat in our minds and should always remain front and center.
The Federal Reserve Board's minutes released after the December 2014 meeting indicated that the Fed would wait at least two meetings before raising rates. Its inclusion in that statement means the Fed does not intend to act at its meetings in March or April. The December language appears to us to put the focus on the Fed's meeting in June for a possible raise in rates.
Fed officials have long pointed to that June meeting as the most likely date for a first rate increase, and some analysts continue to regard that as a good bet. In their statement  released last week, the Federal Reserve and its chairwoman, Janet Yellen again kept its options open, signaling that it would not raise short-term interest rates any earlier than June.
Just as the Fed statements are beginning to sound repetitive, so too am I when I tell you that smart buyers and sellers will move quickly this year while interest rates, not unlike the AFC playoff footballs, remain somewhat deflated. Thirty-year fixed rate loans are running at approximately 3.65%. If rates were to rise to 5% before you make your move, you would end up paying an additional $57,000 in interest over the life of a $200,000 loan...that's a tidy sum that could otherwise be put into an IRA for early retirement or pay for a child's college tuition.
Don't be caught short. The Super Bowl is over and the real estate market in Dane County is wide open for business. Give me a call to see if I can help!
Posted by Kathy Smith Epping at 3:15 PM No comments:

We do not have cable television.  We had Dish Network for a while, but discontinued that, too.  We don’t really miss it, unless the Badgers are playing.  That was the case last winter as the Badger Basketball team was making a great run at the end of the season.  We headed to a local tavern to take in the game.

While watching, we met a gentleman who was also a sports fan and had just moved back to Madison after some time away.  We chatted about the game (a victory!) and the changes that had taken place since he had left Mad-town.  I also learned that he was thinking of buying a house.  We exchanged cards and called it a night.

Over the next few weeks, we stayed in touch and I learned about what he was looking for.  A house with character was important to this buyer.  He also likes to cook, so a “good” kitchen was also essential.  We looked at some small houses.  We looked on the near east side and the near west side.  We even looked at some condos.  No luck.  Nothing was “right”.
I had seen a house on the near east side listed for sale and I went to take a look.  It was small, quaint and in a great neighborhood.  And did I say small?  The kitchen was old and outdated.  Certainly, I thought, not the right house for this buyer.

A few days later, I received an e-mail from my client saying he found a house he’d like to see again.  He had gone to an open house and was intrigued.  It was the “old, outdated, small kitchen” house that I had discounted as not the right house for this client who likes to cook.  We scheduled an appointment to see it again.  We looked at it a total of five times.  He loved it!  Well, he loved many things about it and he could see the potential that some elbow grease and some updates could bring to a house that was in a terrific neighborhood.

I almost always learn something from my clients.  I learned a great lesson from this client who taught me that I should never discount a property as not the “right” one.  That is never my decision.  It is always the decision of my client.  I can advise and counsel and play devil’s advocate.  But at the end of the day, the decision on whether or not to make an offer on a house always rests with my client.

My client decided to make an offer on the “old, outdated, small” kitchen house.  After some tough negotiating, he had an accepted offer.  He was thrilled!  He told me the house makes him happy.  What could be better?  I think he is now deciding how to make the kitchen into a chef’s paradise! Perhaps you know someone who needs an advocate to help them buy or sell a house.  Please feel free to pass along my number, 608.333.4406.  I’d be happy to help!  And I promise – no preconceived notions!
Posted by Kathy Smith Epping at 2:01 PM No comments: