2017 was a wonderful year in the Real Estate world. Seller's sold and buyer's who were savvy and on top of the happenings of the market got what the wanted, too.

Now a full two months into the new year, and it's again shaping up to be a crazy year.  If you are thinking of selling this year, better get going!  To whet your selling appetite, take a look at what sold on the near west side of Madison in December 2016. 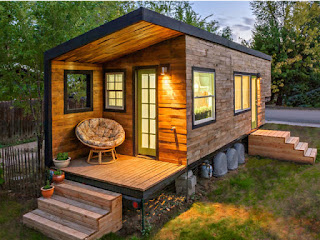 When I was very young, I lived in a “tiny house”.  In those days, they were called trailers.  The tiny houses of today are nothing like the trailers of yesterday.  Today’s tiny house can be as small as 140 square feet and are often outfitted with all the amenities of homes much larger.

If you are like me, you have seen the television shows and the new articles about this newest trend in housing.  What surprises me is how popular they have become.

Not long ago, I listed a “tiny house”, but it wasn’t the typical tiny houses we see in the media.  This one was built in 1928 and is a whopping 652 square feet of character and charm (see my post from Dec. 22, 2016).  I’m not surprised that this house sold; it is cute as a button.  What intrigued me is the number of people who were interested in buying it!  I could have sold that house five times!  We had multiple offers and I had three phones calls after the accepted offer from buyer’s who wanted me to contact them if the transaction didn’t come together.  And this was all happening in late December, not typically a strong season for Real Estate sales. 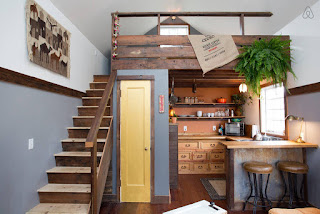 Not that long ago, McMansions were the trend.  The bigger the better and the more bells and whistles the more popular they were.  It seems that trend may have reversed itself, at least for some people.

It will be interesting to watch the tiny house revolution to see where it goes. They are certainly a far cry from my trailer days!
Posted by Kathy Smith Epping at 8:46 AM No comments: 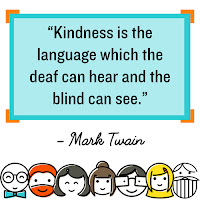 We could all use a little love.  And sometimes the smallest gestures have the biggest impact on someone’s day.

February 12-18th is Random Acts of Kindness Week.  Take some time during the week to make someone’s day a little brighter.   Here are a few ideas that take little time or money:

For more ideas and to get inspired, visit the Random Acts of Kindness Foundation.

I’ll be out there spreading the love.  Let me know how it goes for you!

Posted by Kathy Smith Epping at 10:18 AM No comments: 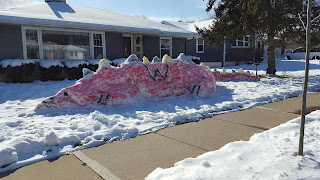 Wisconsin LOVES it's Badgers.  It seems we also like snow, usually anyway!

The heavy wet snow of a week or so ago was perfect for making snowmen and I've seen plenty around town.  But the creativity of some west side Madisonian's caught my eye as I drove past a Badger made of snow!  It's a bit dragon-like with a long spikey tail but the red and white paint and the unmistakable Badger face make it clear that this creature is a Badger!

As we head into the second month of 2017, we all know there is plenty of winter left in Wisconsin, so have fun with it! Get outside for a walk or a snowshoe excursion.  Lace up your skates and glide around on one of Madison's ice rinks.  And if it snows again (more likely than not), get creative with snow sculptures.  I promise it will put a smile on your face and a skip in your step!

Posted by Kathy Smith Epping at 8:50 AM No comments:

2017 is off to a robust start!  This year will undoubtedly see some changes - both large and small - across the economic and social-political spectrums.  Some have already taken place!                       Predicting whether those changes will be for better or worse remains difficult.

The good news is that there doesn't seem to be a lot of change on the horizon as far as Wisconsin's real estate market. Inventory will likely remain low and home prices will remain strong. New home construction will remain fairly stagnant and foreclosure rates continue to diminish. The only real change in the foreseeable future is that interest rates will increase, but analysts predict those rate increases will come in small increments.

So, what are some other trends we may see as we  move into 2017? Don't be surprised to see Millennials and Baby Boomers dominating the housing market. It seems a little odd, but the market will probably will be led by these two demographically diverse groups for the next decade.

Speaking of Millennials in the marketplace, cities in the Midwest are predicted to continue to beat the national average in millennial home purchases in 2017. Madison, Wisconsin is leading the pack, followed by Columbus, Ohio, Omaha, Nebraska. Des Moines, Iowa and Minneapolis, Minnesota. In 2016, the millennial market share in these areas was a whopping 42 percent!

Nationally, baby boomers will make up about 30 percent of all buyers in 2017. Despite the anticipated interest rate increase, the Boomer market will remain strong because this demographic is less dependent on financing.  Stay tuned as we move into 2017!
Posted by Kathy Smith Epping at 8:08 AM No comments: