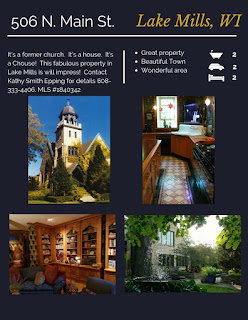 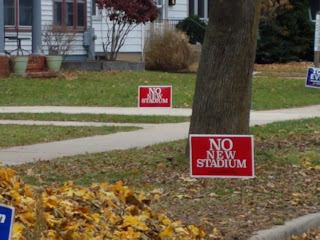 Homeowners surrounding Edgewood High School are on a mission.  They are opposing the proposed new football stadium that would include adding seating, lights and a sound system to the practice field that already exists.  Local residents are concerned about the noise, light pollution and extra traffic and parking issues that 6-8 night high school football games will mean for the neighborhood.

Others in the area, and beyond, have concerns about what the added light and noise will mean for wildlife living along Lake Wingra and in the nearby arboretum.

I think it would be great if Edgewood had a "home" field.  They currently play homes games at Middleton High School.  The same is true of West High School; their home games are played at Mansfield Stadium at Memorial High School.  Neither school has a true "home" field.  It is certainly hard to distinguish a "home" game from an "away" game when you share a field with another school.

That being said, I do have some concerns with the proposed new stadium.  When Edgewood installed the current practice field several years ago, they assured the neighborhood that the field was just for practice, there would not be any high school games played on the field.  They have changed their tune, which is my concern.  It's a slipperly slope.  Six-eight night football games each fall turns into evening soccer games a few times a week in the spring and fall.  And what about Lacrosse games?

I'm still on the fence and I can see both sides of the issue.  Time will tell where this issue lands.  What are your thoughts?
Posted by Kathy Smith Epping at 8:37 AM No comments:

Home sales in Wisconsin fell sharply in September, dropping 12 percent relative to September 2017, according to data released by the Wisconsin REALTORS Association.

A continued shortage of available properties has caused a year-to-date decline in sales of almost 3 percent compared with 2017. Home prices have increased statewide by nearly 7 percent, though the upturn in Dane County has been slightly less, with prices increasing only 3 percent over the same period.

While new construction hasn’t quite kept up with demand, a new report from the Wisconsin Policy Forum shows a jump of almost 2 percent in new construction for Dane County — a trend that will hopefully help to provide buyers with more options.
The data indicates strong economic growth in the area. Development and property values have returned to pre-recession levels, with countywide property values increasing more than 20 percent in the last decade.

Although housing in Wisconsin remains affordable by national standards, a recent rate increase by the Fed has pushed mortgage rates up by more than three quarters of a percent since September 2017. With more rate hikes expected, enlisting the help of a Realtor can pay dividends.  Feel free to contact me to talk!
Posted by Kathy Smith Epping at 12:19 PM No comments: 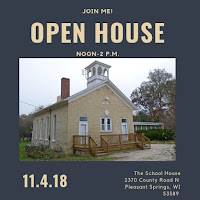 FORMER SCHOOL HOUSE, charming, historic, and full of 'flexible spaces' - owned and occupied for nearly 50 yrs by UW Art Faculty Wayne Taylor (with wife Donna), during which many gala gatherings were held, much artwork was produced, resultant shows of two and three dimensional art had plenty of space to be displayed.

Fabulous ambient light and high ceilings in 'Great Room', some newer windows and maple floors.  The property has more than 1500 sq ft of studio/work space. Wood burning stove plus Zoned Forced air heat keeps spaces cozy. Newer kitchen with lots of storage. One bath off bedrm, old schoolhouse half bath for guests.  Loads of options for craftsperson or artist.
Posted by Kathy Smith Epping at 6:58 AM No comments: