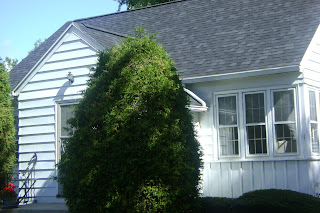 You've heard the saying, "If these walls could talk...".  What if they could?  Every house has a story to tell, most with many chapters.  The first chapter includes the first homeowners and the memories that were made.  Perhaps these homeowners built the home, in which case the chapter includes decisions on floor plans and fixtures.

Succeeding chapters follow the lives and updates of subsequent owners.  The story embraces the changes these new occupants made to the house to make it their own.

There is a house on my block that has a long story, but only one chapter that spans 62 years!  Until recently, the house was occupied by the original owner.  The three bedroom, one bathroom 1200 square foot bungalow served the family well.  It offered shelter from the snow and rain and it provided a safe place to sleep at night.  The small, cozy kitchen supplied nourishment of both food and family time.  And the yard was a source of much joy through the years.

The owner has a notebook that documents everything about the house, from the cost of building materials and construction labor to the roof that was recently replaced due to hail damage.  The house, and the notebook, date back to 1940.

In more recent times, we have become a transient society, moving from home to home whenever the mood strikes us.  We wanted more.  More space, more bathrooms, more bedrooms...more, more, more.

For one family in my neighborhood, less was more!

Soon, this one-owner home will have a new family residing within it's walls.  This strong, sturdy house will again offer shelter and a safe place to be.  It's unlikely that the new homeowners will live in this house for 62 years, but hopefully the memories they make will last a lifetime.
Posted by Kathy Smith Epping at 9:39 AM No comments: 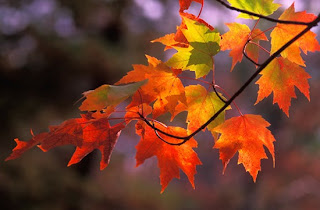 Ahh, Fall is here!  Cool, crisp nights, leaves crunching under your feet and my least favorite, shorter days.  But you can make the most of those short days by taking in some great fall activities around the Madison area.  Here are a few of my favorites.

The possibilities are endless.  Whatever you decide to do, make it a great season!
Posted by Kathy Smith Epping at 8:11 AM No comments:

1. the ability to be sustained, supported, upheld, or confirmed.
2. Environmental Science.  the quality of not being harmful to the environment or depleting natural resources, and thereby supporting long-term ecological balance.

Based on that definition, The Sustainability Parade scheduled for Saturday September 24 from 10:00 a.m.-1:00 p.m. certainly qualifies.  The "Parade" begins at Sequoya Public Library with a tour of the library's "green" construction methods.  A marching band will then lead the group to the Midvale Heights neighborhood where several residents will offer advice and tips on sustainable gardens, landscaping and construction.

I recently hosted an Open House for a colleague of mine.  It's a very nice home in a new subdivision (you can check it out here).

I had a good showing, six or eight different parties through in the course of two hours.  That's a nice number, as I have a chance to visit with those that come through.  One woman really like the house, however there was one aspect of the home that she wasn't crazy about.  As she voiced her objection, I was all set to counter her objection with all the reasons the feature she disliked was actually positive, but I stopped short.

It's not about whether I like this feature or that amenity, it's about finding out what the buyer likes and wants. I"m not buying a house, she is.   I realized this may not be the house for her and that's OK.  Sometimes objections can be overcome, but sometimes they aren't meant to be overcome.  They just are!

So instead of objecting, I just said "Hmm, I've never thought of that."  Selling real estate is not actually selling at all.  The Realtor's role is to form a partnership to assist the buyer in finding the right home or property to meet their needs and then advising and guiding them through the process.  When a buyer finds the house they want, they will sell themselves!
Posted by Kathy Smith Epping at 8:37 AM No comments:

If you live on the near west side of Madison and have concerns or opinions on the urban planning process, plan to attend the Hoyt Park Area Neighborhood public meeting.  That meeting is scheduled for Tuesday September 13th at 6:30 p.m. at the Sequoya Public Library.

A volunteer committee has been working for several months, in partnership with the city and Vandewalle and Associates, to develop a plan for the neighborhood bordered by Midvale Boulevard, Mineral Point Road, University Avenue and Franklin.

Add your voice to the group that will be gathered on the 13th to discuss concerns and aspirations for the neighborhood.  Can't make it?  Take the neighborhood survey.  To find out more, visit the Hoyt Park Area Neighborhood Plan website.

I hope to see you there!
Posted by Kathy Smith Epping at 3:58 PM No comments:

In an earlier post I mentioned that August is typically a slow month for the housing market, for a variety of reasons.  In fact, one fellow Realtor told me she thought August was slower than December!  Well, this past August was slow!

If we look at what happened in the housing market in August 2011 compared to June 2011, we find some interesting statistics.  The number of homes that sold in August in Sunset Village, Westmorland and the Dudgeon-Monroe neighborhoods has stayed virtually the same from month to month, but what changed in August versus earlier in the year was the final sales price for homes.

For instance, in Sunset Village, the prices in August dropped 19% from the prices houses sold for in June.  In the Dudgeon-Monroe neighborhood, the spread was even wider with prices dropping 37% from June until August.  The Westmorland neighborhood is the only area of the three that saw an increase in the average home sale price in August compared to June, a 114% increase.

Now, there are lots of parameters that could account for this.  The size and condition of the homes on the market, as well as the price.  Location, a long-time foundation of real estate transactions, could also be a factor (busy street, corner lot, etc.).

Whatever the reason, I anticipate (and hope!) that the market will pick up during the coming fall months.  Interest rates continue to be at historical lows and there are houses available for the right buyer.  The good news is all three neighborhoods continue to see fairly quick movement, at the right price.  It took less than a month for these homes to sell, when the price was right.

We'll have to watch and see what September brings.  In the meantime, here's what happened in August:

An Author Among Us

Madison is know for celebrities such as Eric Heiden and Chris Farley.  Closer to home, there are rumors that Chris Noth, of the television series, "Sex in the City" and "The Good Wife" lived in Sunset Village for a time.

Bill Bibo, Jr. doesn't profess to be of the same celebrity status as these individuals, but he is hoping to make his mark quietly penning children's books and stories in Sunset Village.  Bibo is an architect by trade, but over the last few years he has written short stories for teenagers.

Is designing a story much different than designing a building?  Both need a solid foundation with subplots to keep the structure of the entity supported.  For Bibo, he has found pleasure and success with both careers.  As an architect with Flad Architects, he specializes in health care and has been involved in projects all over the U.S., most recently a project at the UW Hospital.  But it's his writing and the process of writing that he really enjoys.

"I've always been a reader and I took a creative writing course in college," Bibo explains.  "When our youngest son went off to college, I found I had more time to write." 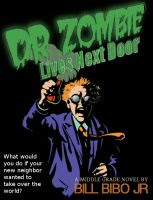 Recently, he has written a self-published e-book called Dr. Zombie Lives Next Door for children ages 8-12.  The story begins when Jenny and her best friend Bobby both believe that the notorious Dr. Zombie has moved into the empty house next door.  Strange machinery was unloaded from the moving van and even stranger lights appear in the basement late at night.  What they didn't count on was that Dr. Zombie has a family and his son Victor, is in the same class with Jenny!  Then there's the mysterious man in black who's hiding in the bushes watching their house.

"Everything comes together at the funniest science fair you've ever seen," says Bibo.

Bibo is working on a second book for pre-teen readers called Hamburger Madness about a robot, CJ, and a human, Murray, who run a hamburger franchise on the dark side of the moon.  "Hamburger Madness" will be the the first in a series of books that chronicle the adventures of CJ and Murray.

Dr. Zombie Lives Next Door is available for $1.99 at smashwords.com  and amazon.com  You can learn more about Bill Bibo, Jr. on his blog, Bibo Madness.
Posted by Kathy Smith Epping at 5:34 AM No comments:

What Would You Do to Attend a Badger Football Game? 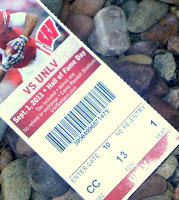 Ahh, Badger football season has begun!  For me, it began in a most unusual way!

A last minute invitation to the season opener against UNLV had me a little harried.  Change into a red shirt, grab some cash, feed the dog and I was out the door with my son at the wheel of the car.  A stop at my parents house to pick up the ticket and then a ride a few more blocks to get closer to Camp Randall where I would meet up with my mom.  This was going to be fun!

As I was climbing out of the car, my ticket in my lap, I watched as the ticket fluttered into the sewer!  Seriously, it was like slow motion!  Now what??  I could see the ticket, but how to retrieve it?  Well, I did what any normal, Badger fan would do.  I laid in the gutter, reached into the sewer and tried to grab the ticket.  Drat!  My arms are too short!

Hmmm, what to do?  Along came a tall (long arms) college student.  I wondered if he could reach it.  I asked if he would try and he obliged, but again, his arms were not long enough.  Ah ha, another idea!  What if we lift off the grate?  Sure enough, that's all it took!  My son, out from behind the wheel of the car now, jumped into the sewer and swooped up my ticket.

I made it to the game, a few minutes after the opening kickoff.  It was a fun game, a Badger victory over UNLV 51-17.

And the moral of the story: put your game ticket in a safe place and if it does fall in the sewer, remember the grates lift off....no need to lay in the gutter!  At least I got a good story out of it!