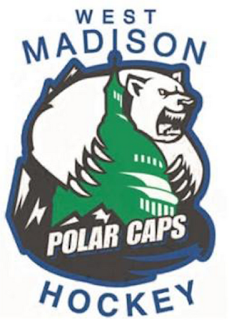 I've written before on this blog about my family's involvement in youth hockey.  It has been a great sport for our kids and for the whole family.
As the weather turns colder, I can't help but think of the upcoming season.  The West Madison Polar Caps (the west side club organization) is holding a few events that can help you and your children get a taste of what hockey is all about.
The first event is the Try Hockey Boot Camp.  It is a three week "crash course" in hockey for interested skaters to let them see how much fun hockey is!  It includes FREE equipment rental, and the $25 fee is refunded if they join the Polar Caps.  The camp starts Saturday September 29, but there's still time to join the group!
The Polar Caps are also planning two USA Hockey events to let kids try hockey for free.  They will be hosting another Try Hockey for Free Day on November 3rd, and a Girls Hockey Weekend on October 13th which will allow kids to try hockey for a couple of hours and get a taste for the game.  These events are being held in conjunction with Madison Ice, Inc., the organization that runs Madison Ice Area and Hartmeyer Ice Arena.
Here's hoping for lots of ice this winter!
Posted by Kathy Smith Epping at 2:33 PM No comments:

For a little more than a year, the Hoyt Park Area Joint Steering Committee has been hard at work developing a master plan for the neighborhoods bordered by Franklin Ave., Mineral Point Road, Midvale Blvd. and University Avenue.

A draft plan has been prepared which addresses park and open space, housing, Owen Parkway improvements, and bike and pedestrian improvements.  Neighborhood associations have had the opportunity to review the plan and make comments on draft plan.

Planning continues to progress with the September meeting of the Hoyt Park Area Joint Steering Committee (HPAJSC) scheduled for September 17 at 6:00 p.m. at the First Baptist Church located at 518 N. Franklin Ave.

For more information on the plan visit the HPAJSC website.
Posted by Kathy Smith Epping at 1:16 PM No comments:

Situated unassuming at the end of a strip mall at the corner of University Avenue and Farley Street is a bookstore called "Booked For Murder".  Dubbed the the mystery reader's paradise, you may have guessed that the shop specializes in murder mysteries.

"Booked For Murder" is more than a bookstore, however.  They are home to a number of book clubs and like their big store brothers, hold book readings and signings by local authors.

One such event is scheduled for this Thursday September 6 at 6:00 p.m. where local author Teri Woods will read from her first novel "The Fixer".  This self-published novel is gaining critical acclaim and Internet chatter that is unusual for self-published authors.  Considering most self-published books only sell about 150 copies, "The Fixer" is blowing that statistic out of the water.  Woods has sold more 10,000 copies!

If you are looking for something to do on Thursday, join me at Booked For Murder.  Or pick up a copy of the novel at Booked for Murder.  You won't be disappointed!
Posted by Kathy Smith Epping at 6:14 PM No comments: