There are many people who view Halloween as a scary night, but according to the U.S. Census Bureau, 92 percent of households consider their neighborhood safe.  In addition, 78 percent beleive there is no place within a mile of their home where they would be afraid to walk alone at night.

I count myself in those statistics.  How awesome is that!  I also count myself lucky to have little ghosts and goblins knocking on my door looking for Halloween treats.  For me, Halloween is the last "holiday" before the snow flies.  I know Thanksgiving often sneaks in, often before the first snowfall, but Halloween is like the last hurrah before winter hibernation.  It's the last time I see many of my neighbors on a regular basis until the longer days of spring arrive.  For that reason, Halloween holds a special place in my heart.

In addition to the traditional trick-or-treating on the 31st, there are a few other neighborhood Halloween gatherings in my neck of the woods this year.  The Sunset Village Halloween Parade is scheduled for Sunday October 30th from 2:00-4:00 p.m. at Sunset Park.  Food will be available courtesy of Tex Tubbs/Cactus Ranch. 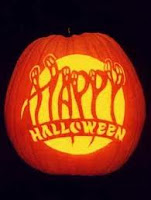 If you are up for more parading, the Westmorland Halloween Parade & Party with the Gomers is planned for October 30th beginning at 4:00 p.m.  The parade will begin at Westmorland Park and wind it's way through the neighborhood to Queen of Peace School.  Kids will be part of the entertainment this year at The Gomers Rockstar Kiddyoke!

Whatever you decide to do this Halloween, I hope it is an enjoyable holiday for you. I hope you are able to raid your kids' Halloween buckets.  And I hope you are part of the 92 percent of Americans who feel safe in their neighborhood!
Posted by Kathy Smith Epping at 2:24 PM No comments: 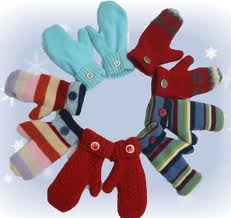 The two women started Knittin' A Mitten for Midvale, a community event that has local knitters from the Midvale-Lincoln parent community and the surrounding neighborhood knit mittens for the school children at Midvale and Lincoln Elementary Schools.  The first year, the group knit 250 pair of mittens!

With more little hands that need mittens each year, the group continues to knit mittens for students.  This year's Knittin' A Mitten kick-off is scheduled for Monday October 24th from 6:30-8:30 p.m. at the Midvale School Library.   If you are a knitter and would like to help out, plan to stop at the kickoff.  It offers an opportunity to socialize with other knitters while helping those in need.  The group will have yarn and beginner-level mitten patterns available.  Don't know how to knit?  No problem, experts will be at the kickoff to help.  Or, you can offer support through a donation of yarn.  Knittin' A Mitten is a great program to keep little hands warm this winter.
Posted by Kathy Smith Epping at 12:47 PM No comments:

Americans spend more than $50 a year (per person!) on Halloween.  From costumes to candy, Halloween is surpassed only by Christmas as the holiday with the largest cash outlay.

Not there is anything wrong with that if ghosts and goblins are your thing.  But there are inexpensive ways to celebrate and decorate for this ghoulish holiday.

Creativity is the key.  Pumpkins, gourds, and squash are relatively inexpensive and in ample supply at this time of year.  Bales of hay and potted mums are also easy to find.  In fact, you can find lots of decorating items at the farmer's market, Home Depot and Menard's, or the grocery store.

Plethora of fallen leaves are perfect for stuffing a scarecrow or a "dead body".  Cardboard boxes can be re-purposed into gravestones.  And a little chalk can go a long way in marking a long driveway or sidewalk with dead body outlines.

One of the easiest and scariest decorating techniques is silhouettes.  Hanging in the window in the shape of crows, bats or witches, these old-world decorating methods also lend old-world scariness to the holiday when the objects are back lit with a spotlight or lamp.

Whatever you decide to decorate with, make it fun and easy.  No need to break the bank.  After all, it's only a few pumpkins and spiders!
Posted by Kathy Smith Epping at 4:25 PM No comments:

I have a client who will be writing an offer on his first house today.  He has been waiting until just the right time.  He looked into purchasing during the First Time Home Buyers Credit program last year, but decided to wait.  Today, he said he was glad he was patient.

Other surveys indicate people have pretty strong feelings about owning a home. According to Fannie Mae's National Housing Survey, 95 percent of respondents see home ownership as a positive experience.  A 2011 Gallup Poll showed 69 percent of people think now is the time to buy.  And eighty-eight percent of people continue to view home ownership as the American Dream, according to the New York Times & CBS News Survey.  My client is one of them!
Posted by Kathy Smith Epping at 10:04 AM No comments:

Typically, the housing market begins to slow down during these autumn days.  In September, we did see a little slow down in the market, in terms of houses sold.  Listings, however are actually up a little.  It continues to be a buyers market and even in Westmorland, Sunset Village and the Dudgeon-Monroe neighborhoods, where we have seen the housing market fairly stable, the inventory outweighs the buyers writing offers.

What has happened in the last eight to six weeks to slow down the sales?  A couple of things.  Interest rates have dropped again.  Many potential buyers (a couple of my clients included) have decided to refinance and see what the spring market brings.  County, city and state budget are also in the works.  Those government employees continue to be in a holding pattern until they are comfortable with how everything shakes out.

If you are a seller, price will continue to be a driving force in how long it takes to sell your home.  The condition of your home will also be a factor.  The better it looks (and inspects) the better your chances of a successful sale.

Here's what happened in September:

Posted by Kathy Smith Epping at 6:23 AM No comments: 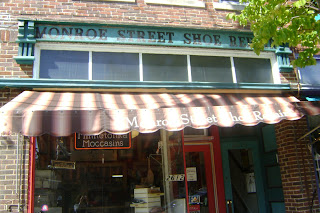 Nestled in the 2600 block of Monroe Street sits an unobtrusive shoe repair shop that is magic to your torn sandal strap or broken zipper.

For more than 30 years, proprietor Sally Kopecky has been repairing boots, luggage, coats and handbags.  Step inside her quaint little shop and the smell of leather wafts over you like a warm shawl.  Small (and large) shoe knick knacks are scattered around the shop and antique shoe advertisements hang on the walls.  Sally even uses an old cash register with the old fashioned "typewriter" buttons and the cha-ching that reminds me of my younger self.  No computer or cell phone needed here!  The Monroe Street Shoe Repair is the kind of place that makes you want to slow down and enjoy the simple things in life.